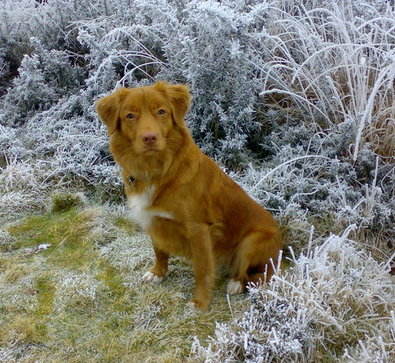 Koda came into our lives just over a year after I had lost my beloved Finnigan.  I decided I wanted another Toller with an idea of breeding my own lines later on.  I asked some of the Toller people I knew if they knew of anyone with a litter expected and was told that Cathy Shaw had had a litter but they didn't know if there were any puppies available.  I rang Cathy, explained that I was looking for another toller to do obedience and a little showing, I also told her I would prefer a bitch puppy if possible as I would like to breed my own in the future.  She said her Lily had had 4 bitch puppies out of a litter of 8 and 3 were spoken for, however if I wanted one she would be happy for me to have the remaining one but they would be sold with breeding restrictions.  She also said that she would lift these restrictions if I had all the health tests done.  Once again Brenda and I travelled north - this time to Cumbria to meet Cathy and all the puppies.  They were gorgeous!!!  I had to wait until all the other bitch puppy owners had chosen their puppies until I knew which one I had. 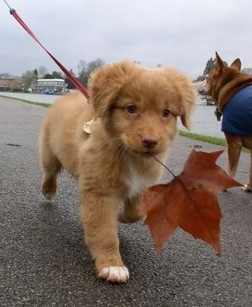 She is an amazing dog in every way, she has a beautiful temperament, is very loving and extremely intelligent.   Whilst we were waiting for her to grow up I decided to take her to some breed shows, imagine my amazement when at her first show at 6 mths and 2 weeks old she went Best Puppy at a championship show under Mrs Babs Harding.  She has continued to do extremely well taking her first Best Bitch award at 9 months old under Miss Jean Lanning, and when I couldn't make it to a show early on in her first year my father, Terry took her for me and now he handles her at every competition.  The two adore each other and make an amazing team and I was over the moon for both of them when they took Best of Breed, the first bitch since 2006 and only the 7th ever bitch to have done so, under Mrs Elaine Whitehill.  Unfortunately or fortunately depending on your point of view, my company offered to pay for me to study and I no longer have the time for obedience training, so we have stuck with showing which we love too and when I can, we do a little gundog training on our free weekends and so far Koda has attained The Gundog Grade 1 Certificate with a distinction.
Koda was released for breeding after I had all the necessary tests done and had shown them to Cathy.  She is my foundation bitch for the Riverwatcher Tollers and has recently had her first litter of puppies with Woody, (Trevargh the Entertainer at Brizewood).
My thanks to Cathy and Lily, (Newfanova Aurora at Shoredancer), for producing this fantastic little red dog and for allowing me to have her!
Hard to believe my Koda will be a veteran in October 2013.  She has produced 2 fantastic litters and I'm so pleased to have 2 of her children still with me.  She has been and always will be a dog in a million, she is such a gentle soul with the heart of a puppy still! 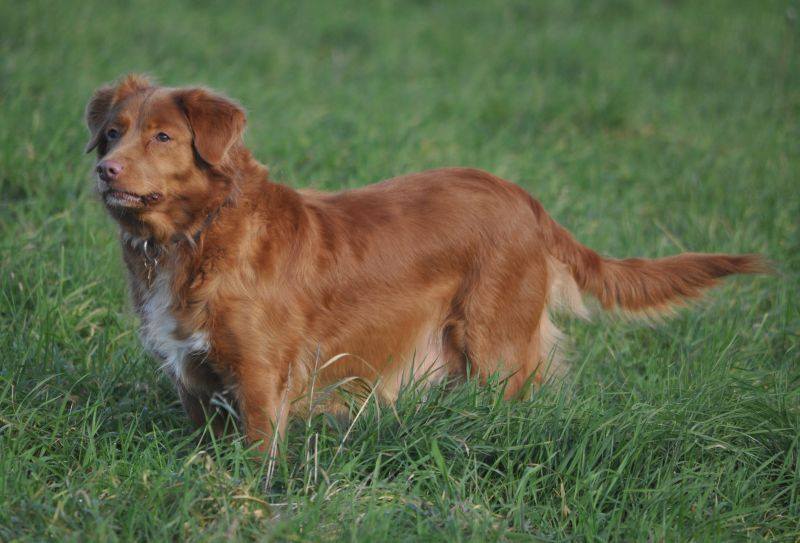 Here she is aged 7 and still beautiful.
To Koda's pedigree
To Koda's Show Results
Back